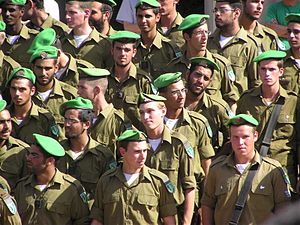 Nahal, an innovation that lasts …

The role of the young soldiers of this brigade founded by Ben-Gurion in 1948, in the tradition of the pioneer spirit, was to supply the soldiers with sufficient military resources, but also to help in the creation of kibbutzim and new agricultural communities. The Nahal from its inception had the task of sending groups of 10 young people who were to found a kibbutz on a desolate land.

Over the years, the Nahal Brigade has been involved in many conflicts. Combat preparation has therefore become a priority. However, the Bazelet ’(lit. basalt) battalion of the Nahal deserves attention in light of the kibbutz renewal in Israel.

In 1987 it was decided to unify the Nahal Parachute Battalion with the 950th Battalion which was made up of veteran soldiers of the Nahal Brigade, which led to the creation of the “Bazelet” Battalion as we know it today.

The Nahal and in continuation the Bazelet battalion, have never ceased since 1948 to work for social solidarity and a collaborative life!

Bazelet, a continuation of the Nahal, is indeed a unique battalion as it is partly made up of “gar’in” members. A “garin” (Hebrew: גרעין, lit. core) is a group of young people who follow a specific program that begins even before their integration into the military. The members of “gar’in” carry out a year of pre-service which can be described as “civil service”, in which they volunteer to provide aid in disadvantaged neighborhoods, in cities in development, in kibbutzim and in population centers where live children and adolescents who require special education and attention.

Later, the “gar’in” members joined the “Bazelet” Battalion where they served for a year and a half as combat soldiers. They then continue their service for an additional year of volunteering in the social field (in Hebrew, this year is called ‘Perek Messima’, פרק משימה). At the end of this year, they return to the army for 6 months during which they carry out routine operations. This battalion is one of those which brings together the widest range of the Israeli population (new immigrants, young people from kibbutzim and moshavim, young people from big cities, etc.)

The role of the Nahal in the creation of the urban kibbutz :

“Co-operative communities began to settle in 1970, when kibbutzim members and officers of the Nahal program, combining military and civilian service, decided that they wanted to live with the collective dimension of classical kibbutz life while taking part in and influencing the surrounding society.

In 2008, there were already 2000 members of urban kibbutzim, most of them invested in educational and social action.